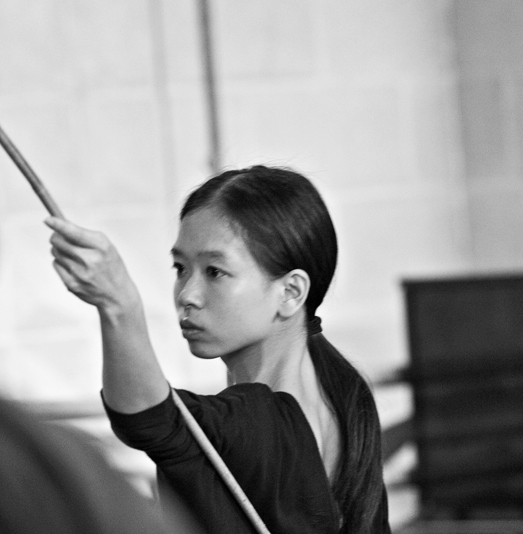 Ching-Ying Chien was born in 1988 and graduated from the Department of Dance at National Taiwan University of Arts. She began working with Akram Khan Company in 2013 with iTMOi and performed in Until the Lions where she won the Outstanding Female Performance (Modern) award at the 2016 National Dance Awards (UK). Dance critic Lyndsey Winship praised her as “a woman of powerful but serene stillness, who shape-shifts between delicate, melting movements, stubborn decisiveness and contorted convulsing.” In 2019, she joined the tour for the company production Outwitting the Devil. In 2020, Ching-Ying became a freelance artist and joined French artist James Thierrée’s – Compagnie de Hanneton for Mo’s and ROOM. She has also collaborated with choreographers and companies in Taiwan, such as Fang-Yi Sheu, Shu-Yi Chou and HORSE. As well as theatre performance, Ching-Ying has worked as the art model and as an improvised dancer for a gunpowder drawing by Guo-qiang Cai titled Day and Night. She was the choreographer and dancer for Stranger, a music video for hip-hop musician Plan B, and a number of videos directed by Adam Smith for British electronic band The Chemical Brothers. She co-created a duet for Akram Khan’s Channel 4 documentary Can We Live with Robots? and recently performed in Akram Khan Company’s 20th anniversary digital celebration The Silent Burn Project. Ching-Ying’s latest choreographic piece Vulture, supported by LMF Dance Fund, National Culture, Arts Foundation (Taiwan) and Akram Khan company, which was presented in Lilian Baylis Studio of Sadler’s Wells and Weiwuying National Kaohsiung Center for the Arts.